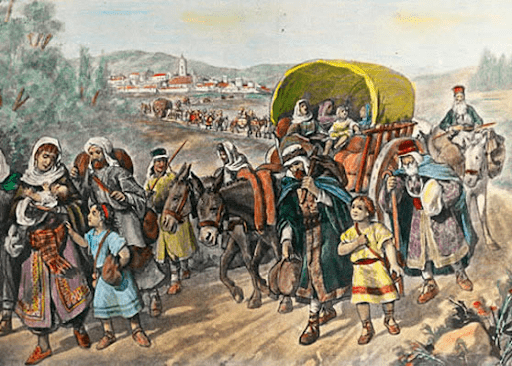 Rabbi Avraham Senior (1412 -1493) was the first rabbi to champion the cause of “pikuach nefesh” (Hebrew for “preserving life”) in its eclipsing all other fundamental principles of the Jewish faith.The highly-respected Sephardic rabbi Avraham Senior was the chief rabbi of the Spanish kingdom. Strictly observant, he was referred to by contemporary coreligionists as the “reish galusa asher aleinu” (foremost authority in the Jewish community). When he was 80 years old, the Alhambra Decree (also known as the Edict of Expulsion) was issued on March 31, 1492, by the joint Catholic Monarchs of Spain (Isabella and Ferdinand) ordering the expulsion of all Jews from their kingdom by July 31 of that year. This would be extended ten more days, until August 10, when all Jews would have to leave the country, or convert to Christianity, or be killed. Shockingly, that final date coincided with the 9th of Av, when Jews bemoan the destruction of the Holy Temple.

For many reasons, including the Black Plague of the fourteenth century for which Jews were blamed – antisemetic tensions had been mounting. This tension piqued with the Spanish government’s abrupt announcement “to send out all male and female Jews from our kingdoms and [order] that none of them ever come back or return to them.” There was no exception, neither for age, residence, nor place of birth. Any Jew that would not convert or leave the country by that time, would be punished with the death penalty and the confiscation of their property.

The primary motivation of the decree was to eliminate the influence of practicing Jews on Spain’s Christian population, especially the Neo-Christian population (Jews who had been forced to convert to Christianity), to ensure the latter and their descendants did not revert to Judaism. In other words, Jews were seen as a threat to a spiritual “public health”, as it were. (Incidentally, the edict was formally and symbolically revoked on December 16, 1968, following the Second Vatican Council). Although Rabbi Senior and his associate Rabbi Don Yitzchok Abravanel had enjoyed a warm relationship with the Catholic Monarchs, they were unable to avert the decree.

The situation was dire, for leaving the country and leaving behind wealth did not seem a good option. In fact, many of the Jews who would leave Spain would die of hunger or were to be killed by shipwrecks or pirates. This was a situation of “pikuach nefesh!” Yet Jewish law dictates that a Jew must not espouse another faith, even if it costs one’s life!

Amist much debate, Rabbi Abravanel announced that conversion was not an option, and the only option was to leave Spain, which many considered extremely perilous, reckless, and virtually an act of “mesiras nefesh” (“martyrdom”).

After attempting to nullify or soften the decree without success, as mentioned, Rabbi Senior, who happened to be a “senior citizen” (no pun intended), chief rabbi of Castile and one of the closest collaborators of the monarchs, decided comply with government dictates in the name of “pikuach nefesh”.

At the ripe old age of 80, Rabbi Avraham Senior together with all his relatives, was baptized on June 15, 1492 in the Guadalupe monastery. At his baptism, he received a new surname, “Coronel”, which comes from the word, corona, crown. His baptism was given much publicity, to serve as an example for the rest of their community. In fact, during the four-month tacit term that was given for the conversion, many Jews were baptized, especially the rich and the most educated, and among them the vast majority of the rabbis.

Rabbi Abravanel was very critical of his former rabbinical friend’s choice of compliance, and denounced him as a heretic. His former last name had been Senior, which is spelled in Hebrew – שניאור. Rabbi Abravanel explained the meaning of theses letters – שונא אור, that Senior “hates light”. In other words, the former chief rabbi chose darkness over light, corporeal and temporary security over spiritual life.

And temporary it was. While the new Rabbi Corona and the masses of conversos were able to remain in Spain for the time being, most of them ended up being exposed as keeping Judaism in clandestine, which brought them gruesome and horrible torturing and execution.

Alternatively, and against all odds, 300,000 Jews remained faithful to their values and freedom of choice and left Spain. The rabbis who remained faithful to the religion of their choice ordered that live music be played to accompany them and the rest of the evacuating Jews they left, on the 9th of Av! Although that day is usually one in which listening to music is prohibited, the Jews needed to leave Spain with joy, knowing that they were sanctifying G-d’s name!

This Shabbos marks the 529th anniversary of his receiving the coveted surname, “Coronel”. As mentioned, he was bequeathed with this title at his baptism on the 11th of Sivan, 5252 (June 15, 1492).

This historic moment can be marked by all other Corona rabbis, who choose compliance over liberty, a misconstrued and incorrectly applied concept of “pikuach nefesh” over the eternity of the soul and religious freedom. They can all stay home with masks and keeping a safe corona distance from any other Jew, and celebrate Avraham Senior’s “enlightenment” and the compliance of the majority of rabbis of the time to become conversos.

The rest of us, those of us who choose the Abravanel approach, can go to shul and celebrate our religious freedom. No masks should be worn, and no courtesies of social distancing should be applied. We don’t need to do all that stuff, because we aren’t conversos. We don’t “hate light,” and we will not become “Corona” Jews, G-d forbid.

We will celebrate this Shabbos for our religious freedom. For the eternity of our souls. With song and dance (no musical instruments due to the holiness of the Shabbos).Have a joyous, inspirational, and most importantly – liberated – Shabbos!

How much more evidence does the average person need before they REFUSE to listen to the CDC?

This is not informed consent. This is a public marketing campaign.

Where is the CDC? Who’s looking out for the welfare of innocent children when there is mounting evidence of danger from a rushed experimental therapeutic?

Seven boys ages 14 to 19 suffered from a very rare type of heart inflammation that looks like a heart attack. It’s one that public health officials are beginning to link to COVID-19 vaccines. https://keyt.com/health/cnn-health/2021/06/17/heart-inflammation-condition-looked-like-heart-attack-in-kids-pediatrician-says/

BREAKING: AFLDS presents the Frontline Forum series; a panel of (honest) experts bringing the uncensored truth about health privacy and civil rights, the politicization of medicine, and how you can help.

Tell your senators to sign onto the Portman-Gillibrand bipartisan letter & support funding to protect our shuls, yeshivas, and other targets.

Dear Agudah Activist: Several weeks ago, I contacted you about an extraordinary opportunity our community has to hel...

There is a tweet for everything and @WHCommsDir has a good one..

Former President Trump, 1/24/20: “China has been working very hard to contain the Coronavirus. The United States greatly appreciates their efforts and transparency. It will all work out well. In particular, on behalf of the American People, I want to thank President Xi!” https://twitter.com/GOPLeader/status/1407706767555977223

"The strength of our country is that we can acknowledge our weaknesses and we can work to correct them. I wanna hear how you are working to correct yours before you start to criticize me." @USAmbUN Linda Thomas-Greenfield LISTEN👉🏾 https://wapo.st/3d35CFZ

If you are vaccinated, you are protected.

Covid-19 transmission is accelerating in several poorly vaccinated Southern states in the U.S., and more young people are turning up at hospitals https://www.bloomberg.com/news/articles/2021-06-21/covid-rebounds-in-u-s-south-where-many-have-shunned-vaccines via @bpolitics

Louise Burke was forced out of Simon & Schuster for her political views. She’s not the first. Read more in this new book, published by Simon & Schuster. http://bit.ly/CarlsonTLS

Here's a sneak peek into the most dramatic episode yet of Tucker Carlson Originals. "Hunting MS-13" drops tomorrow on @foxnation

The most dramatic episode yet of Tucker Carlson Originals drops this Thursday. Stream “Hunting MS-13” starting June 10th only on @foxnation

Are we about to shake off our corporate masters? Or will Moderna and Pfizer take out full-page ads in the WSJ and shut them up? #markMyWords

Because YouTube knows better than @PierreKory and thousands of physicians around the world. 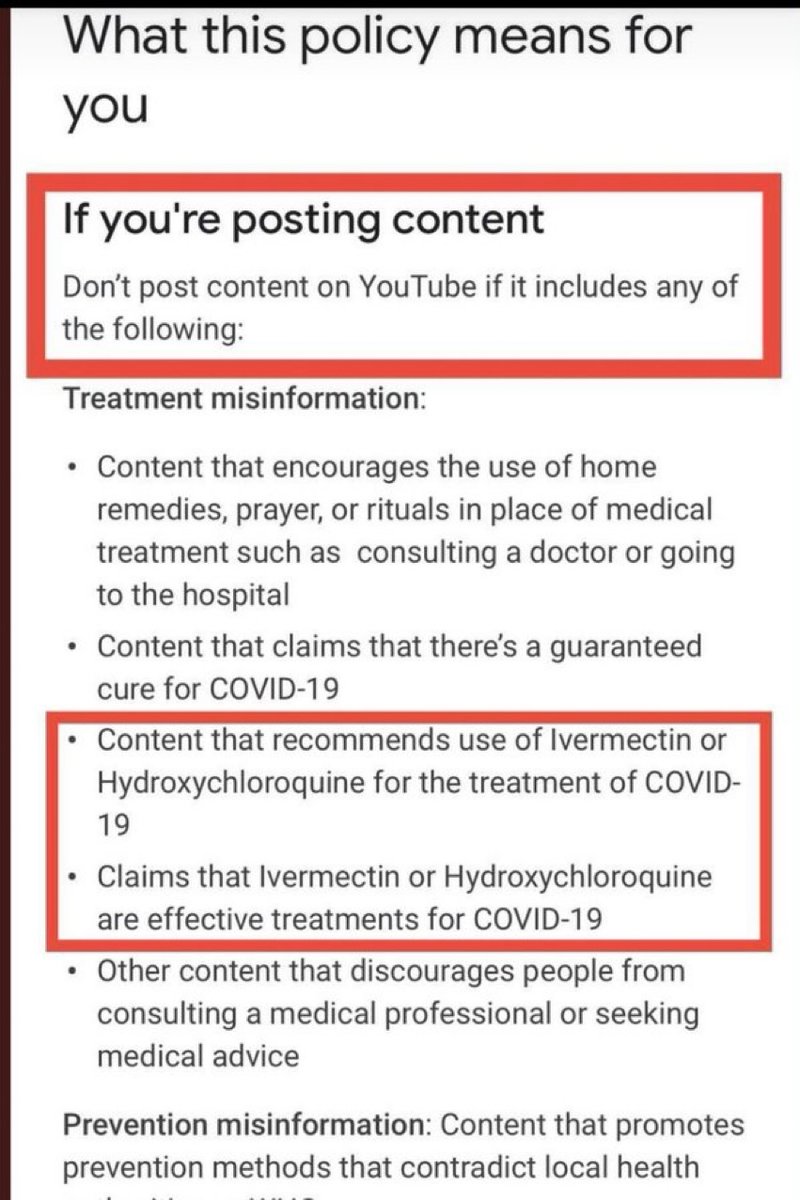 Ivermectin’s value is finally coming to light, long delayed by a “Fear, Uncertainty and Doubt” campaign

Vaccine EUAs *require* there not be a safe, effective treatment. @YouTube and its TNI partners censored, and public health officials set an indefensible standard for evidence.

According to ACIP presenter from @CDCgov, up to 26% of kids with myocarditis are COVID-recovered!!

@DrWoodcockFDA @CDCDirector @US_FDA Y R U not advising against vaccination of COVID-recovered and immune kids? THIS, is your grave error!

#PeterDaszak removed from #COVID commission for conflict-of-interest concerns. via @MailOnline

British scientist Peter Daszak, based in New York, is officially recused from the COVID commission's work on the o...

I transported this patient on June 15th, haven’t had a chance to upload until now.

Australian #Doctors Starting To Refuse To Give Government #Vaccine, Sending People To Clinics Instead via @BitChute

Australian Doctors Starting To Refuse To Give Government Vaccine, Sending People To Clinics Instead

Doctors just might be realizing they are in line for personal libel cases because they realize governments are NOT...

In an interview, 18-year-old Isaiah Harris + his father described how Isaiah had to be hospitalized within 48 hours of his second dose of the Pfizer vaccine + subsequently had a heart attack.

In charge of a Rally at Foley Square, this Sunday to free the political prisoners of the Jan 6 washington

Yes I did not win

But I did win

Congratulations to the winner & Good Luck to you all

Now we start the counting of the votes