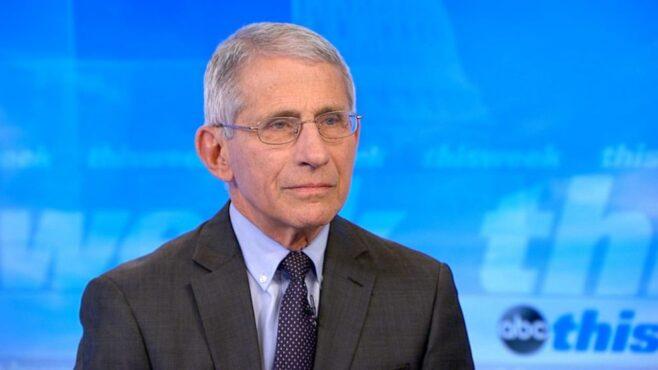 NYT: Fauci Admits To Deceiving The Public About Herd Immunity Because He Wanted More People To Get Vaccinated

In a startling interview with the New York Times, Dr. Anthony Fauci, head of the government’s coronavirus taskforce, admitted that he did not level with the American people about how many people would need to be vaccinated in order to achieve herd immunity because he didn’t think the public was ready to hear his true thoughts, which he feared might discourage people from getting vaccinated.

The Times article catalogued Dr. Fauci’s changing position on how many Americans would need to be vaccinated, which he initially stated would be 60-70 percent. As noted by the Times, about a month ago, Fauci’s tune began to change and he suggested that the figure was actually 70-75 percent. Last week, in an interview with CNBC, he upped that figure (again) to “75 to 80-plus percent.” In the interview with the Times, he changed his estimate yet again and suggested that the figure actually may be “close to 90 percent.”

According to the Times, in the telephone interview, “Dr. Fauci acknowledged that he had slowly but deliberately been moving the goal posts. He is doing so, he said, partly based on new science, and partly on his gut feeling that the country is finally ready to hear what he really thinks.”

In other words, Fauci’s advice to the American public on one of the most critical aspects of the coronavirus pandemic, has not consisted entirely of his honest opinion, formulated by the best science, but rather on what he thinks the country is ready to hear.

Dr. Fauci went on to even more expressly admit that he had fudged his public pronouncements in order to encourage people to take the vaccine. According to the Times, Dr. Fauci was ready to raise his estimates “weeks ago” but refused because “many Americans seemed hesitant about vaccines, which they would need to accept almost universally in order for the country to achieve herd immunity.”

Blithely continuing to explain how polling, rather than science, informed his public pronouncements, Fauci went on: “When polls said only about half of all Americans would take a vaccine, I was saying herd immunity would take 70 to 75 percent. Then, when newer surveys said 60 percent or more would take it, I thought, ‘I can nudge this up a bit,’ so I went to 80, 85.“

Moreover, Fauci went on to explicitly state that his future pronouncements might still be based on his feeling of what the public thinks, not what the science says: “We need to have some humility here. We really don’t know what the real number is. I think the real range is somewhere between 70 to 90 percent. But, I’m not going to say 90 percent.”

Why won’t he say 90 percent? According to the Times, the answer is that “Doing so might be discouraging to Americans, he said, because he is not sure there will be enough voluntary acceptance of vaccines to reach that goal,” in light of the fact that “sentiments about vaccines in polls have bounced up and down this year.”

Robert F. Kennedy Explains The Problem With The Corona Vaccines

Interesting data coming out of Switzerland.

AFLDS stands for human rights, with our VBOR—and state legislatures are taking notice.

A Physician-Patient Relationship resolution was passed in the Alabama Senate; a Vaccine Bill of Rights was introduced in the AL House.

Call/email your State Rep’s & Senators & tell them to enact a Vaccine Bill of Rights.👇
https://www.americasfrontlinedoctors.com/vaccine-bill-of-rights/

Today is the Siyum of Daf Yomi Maseches Shekalim! Mazel tov to Daf Yomi learners, and a history tidbit to celebrate:

can confirm it is not feeling boring in here

Thanks @AK_OK for joining the briefing today and for your great question about the cruise industry in Alaska. Fun Fridays!

@PressSec takes questions from a regional reporter (this one in Alaska) beamed in by video. There’ll be a non-inside-the-Beltway reporter joining each day, Psaki said.

On Monday, Florida Gov. Ron DeSantis and three medical experts took a blowtorch to Google for banning a video of them discussing COVID-19 science.

"These findings suggest that these toxic metal burdens and essential metal deficiencies in infants/children are of serious concern for their neurodevelopment." #aluminum https://www.mdpi.com/2218-273X/11/1/6

Are We Being Denied Good #Health So #BigPharma Can Make Money?
@rustyrockets via @YouTube

This blog-clotting in the brain is occurring mostly in young women, a demographic not at risk from complications of #coronavirus.
#JohnsonAndJohnsonVaccine @US_FDA @CDCgov
via @YouTube

In this excerpt from “The Monsanto Papers,” journalist @careygillam recounts the day that forever changed the life of CA groundskeeper Dewayne Lee Johnson — the day he ended up soaked in #Monsanto’s #Roundup #weedkiller. #TheDefender

Monsanto Papers Part 1: The Day That Changed Everything for One Man and His Family • Children's Health Defense

In this excerpt from “The Monsanto Papers,” journalist Carey Gillam recounts the day that forever changed ...

Ok almost made a 100 before the June 22 election

Have enough family to make that happen 😉😇😝

Canidate for the 48th Council district

Went to a Bar Mitzvah for my cousin

Got a Blessing from a big Rabbi

Then to my 96th wedding & Hung out with my Nephew who was the lead singer.

Picking up my new Dog

He won't wear a mask.